Private accommodation in the town of Vis, Croatia

Apartments town Vis - Browse through our offer of private accommodation in apartments and holiday houses in town Vis, Croatia. Large offer, with most detailed descriptions available. Great prices and fast on-line booking of accommodation for season 2021!

The town of Vis is located in the north-eastern part of the island Vis in the bottom of a well protected bay. It developed from the former settlements Kut and Luka, which became one entity in the 16th century by the building of the church Gospa od Spilica.

The villages from the eastern side of the island such as: Zenka, Milna, Bargujac, Podstražje, Podselje, Plisko Polje and Marine Zemlje gravitate to the town. Since the World War II the whole island had been a military area.

The tourism on Vis began to develop significantly with the demilitarisation of the island at the beginning of the war (1991-1995) in Croatia. So, it has been only 15 years ago that both the island and its town opened for the visit of tourists. The remains of the military objects in the northwest and northeast part of the Bay of Vis are the witnesses of the stay of the Yugoslav Army.

During the last hundred years a part of the population emigrated in the search for better living conditions. There are only about 2000 people living in the town of Vis, and around 3500 on the whole island.

Many visitors, and especially the yachtsmen, are coming more and more to Vis. In every moment you can see changes in life-style, but at the same time Vis has kept the old, irresistible Mediterranean charm and life without stress and trouble.

The fortresses and the stony piles testify to the thousand-year-old settlement on Vis, and the remains of a theatre built into the foundations of the Franciscan monastery on the peninsula Prirovo, antique therms or the Hellenistic cemetery, confirm that Vis is one of the oldest urban centres in Croatia.

The town Vis, the antique Issa, was founded by the tyrant of Syracuse Dionisius the older about 397 B.C. as a base for the Greek colonization of the Adriatic Sea. The settlement of Dionisius had been located in the part of the town, which is now called Gradina and on the peninsula of Prirovu.

In the Hellenistic time Vis had been so powerful that it established its own colonies on the location of the today towns of Trogir, Stobrec and Lumbarda on Korcula island. Many archaeological remains testify to the development of Vis. You cansee the most beautiful example of antique art on Vis in the archaeological collection of the Museum of Vis, which is located within the fortress Batarija: the bronze head of the goddess Artemida.

Beside it there are also other valuable antique works as the head of men and women, ceramic vases of various forms, vessels, and especially a collection of amphora, which were taken out of the sea near the town.
A special archaeological importance are Hellenistic gravestones (stele) found in the town area Mrtvilu on the western side of the today sport- grounds.

The natural conditions and the tradition has determined the development of the economical activities of the inhabitants of Vis. Due to many areas of cultivable and quality land, especially in the fields around the town Vis the agriculture has always been the main part of the economy.

The wine-growing has been the most important activity of the local inhabitants since the antique times, and so the writer Agatarhid told us "how the vine from Issa, an island in the Adriatic sea in comparison with others better". On the other side the rich fishing grounds in this part of the Adriatic

Sea have influenced the development of fishing. Beside the mentioned activities the main factor today are services, and especially tourism.
The town Vis has a rich culturally-monumental heritage from the newer age. There are many summer- cottages, fortresses and palaces. 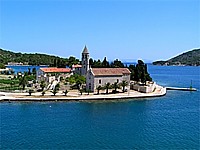 If starting from Kut, which is on the southeast part of the port and the bay, you will also pass by the palace of Jakin, palace of the poet Petar Hektorovic, Petrinovics palace, the house where one of the best Croatian writers Ranko Marinkovic was born, Prdvarics palace and Gazarovics palace. There follow the palace of Gariboldi and the famous Vila Kaliopa, and the Austrian fortress Batarija.

On the port there are waiting the palaces of Mardesicev, Radosijev, Vukasinovic-Dojmijev and the Tramontana palce, and the tower Perasti. Outside the town there are the English fortresses Terjun, Fortica and Velington. 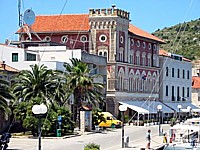 We can point out of the sacral architecture and art especially the pre Romanic Church of St. Jurje (St. George is the patron of the town and is celebrated on April 23rd) in the bay of the same name in the near of the Czechvilla and the Church of St. Marija in Podselju - the spiritual centre of the island, where the inhabitants of Vis pilgrim on Mary Ascension.

Among the other sacral objects you should visit the church of St.Ciprian and Justine on Kut, the Church of Gospa od Spilica, which connects Kut and the harbour, and the Franciscan monastery on the peninsula of Prirovo.
There is a primary and the high-school "Antun Matijesevic-Karamaneo" in Vis.

Inside the town you can deal with various sport- activities. There is well-equipped sport- and recreation centre with four tennis-grounds, a basketball and a football-ground. You also have a sailing, a cricket and a paragliding club in Vis. It is possible to dive outside the town together with other divers in two diving-centres. You can also go mountain climbing and drive bicycle.

The town Vis offers around 1500 beds in private houses and apartments and about 400 beds in hotels. You shall not miss one of the ten restaurants in the town or one of the taverns/ konobas which are parts of the rural households outside the town. You should taste the domestic specialities like domestic bread from Vis, and pilchards from the grill.

During the year there are a lot of interesting manifestations, especially the New Years Eve on open air, the carnival and the International Festival of amateur Theatre in May, the Cultural Summer of Vis with concerts and theatre during the summer months, and a sailing regatta in October.

Vis hides much more interesting details, which are waiting for you to discover !