Apartments Komiza, island Vis - Browse through our offer of private accommodation in apartments and holiday houses in Komiza, Croatia. Large offer, with most detailed descriptions available. Great prices and fast on-line booking of accommodation for season 2021! 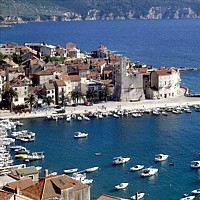 Komiza is located in a deep bay on the western side of the island Vis below the 600 meter high mountain Hum. (1677 inhabitants according to the census from 2001). It is a typical Mediterranean village, which attracts the tourists with beautiful beaches and with narrow roads and houses squeezed together around the harbour. Thanks to the mild Mediterranean climate, the stay in Komiza is pleasant also in the winter months. There are gravel beaches along the whole east coast of the Bay of Komiza with sources of drinking water: Gusarica, Nova posta, Velo zalo.
The name Komiza was mentioned for the first time in the second part of the 12th century. Komiza is a village where the fishing on the eastern side of the Adriatic Sea was born. Its fishers not only ruled with their boats over the Adriatic Sea but they also traded with the neighbouring coast creating fishermen's centres on the Pacific coasts of both Americas. Komiza has always been proud of the fisherman's history, whose remains can be found in the Fisherman's museum located in the old Venetian tower on the promenade (riva), the only one in Croatia. The traditional fishing tools are displayed in it.
A copy of the Komiza fishing boat gajeta falkusa represented the Croatian maritime heritage at the world fair EXPO 1998 in Lisbon. A sacrifice boat is burned every year in front of the parish church of St. Nikola on December 6lh during the celebration of St. Nikola, the patron of travellers, seamen and fisherman (which is also the day of Komiza). 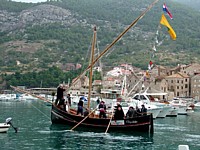 The whole history of the island of Vis on one hand politically and economically connected to the fishing, and on the other hand with the wine-production, which today is also the basis of economy and the pledge of future.

More than two thousand years passed since the first written laudation of the wine from Vis, and there are only few people who didn't hear about the wine vugava and plavac mali or didn't taste it. In the last years the agro tourism has been developed in 10 rural house-holds on Vis and Bisevo. The local culinary specialities (domestic bread-komiska pogaca, dishes under the baking-lid, pilchards on the grill, beans and noodles on fish stew- brodetto) are offered together with domestic wine. Its not possible to imagine the traditional dishes without these fruits of the sea.

The lovers of sports and active holiday can choose between parachute-sailing, riding, walking in nature and diving. There are 20 locations in the depths of the sea with sunken planes, sailing-ships, submarines and war-ships in the surrounding of Vis. If you are interested in culture and entertainment, visit the Fisherman's museum and the music- drama manifestations of the Cultural summer of Komiza, when you can hear the klapa-songs from the taverns/ konobas.

For more than 25 years the International Ballet school is being opened during the summer in Komiza in which the pupils from the whole world get knowledge and achieve dancing perfectionism in classical ballet, and in pop and modern jazz , under the leadership of the ballet- pedagogue Jozo Borcic from Komiza. The manifestation culminates every year with a final ballet concert in the hall of the Memorial home, which makes the numerous visitors of Vis enthusiastic. 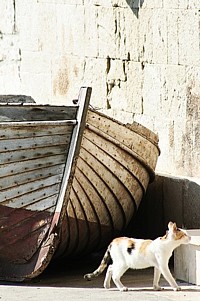 The harbour of Komiza offers the yachtsmen good berths protecting them from the northern and eastern winds, and it is totally open to the northwest. The jugo- wind can cause unpleasant waves in the harbour. Because of the openness of the harbour and its depth the construction of new berths is complicated. This is the reason why there s planned to build a big fisherman's port with a fish bazaar, located in front of the former factory for the conservation of fish Neptun. It will be used by the fisher- boats of Komiza and other ones and domestic boats, while some of the berths in the harbour would be then free for the commercial use. The new owners of the former factory Neptun plan to transform it into an important touristic center, and together with the fisherman's harbour it will help to attract the guests on the island during the whole year. These are the prerequisites for the revitalisation of the economy of Komiza and the whole island.

The town of Komiza is located in the deep bay of Komiza, on the western tip of the island of Vis.  Even though Komiza is located just 10 kilometers from the town of Vis, it is separated by the rest of the island by Hum, a 587 meters high hill that rises over the bay of Komiza, and it can be said that Hum threw the town of Komiza to the embrace of the sea, and oriented it’s population towards the sea as the main transport route and source of livelihood.  When sailing in the waters of the island of Vis, it is easier to find the bay of Komiza than to miss it – this grandiose bay invites you to it’s protection and the waves carry you to it’s arms.

The waters of Komiza boast with one of the most beautiful archipelago on the Adriatic, with many islands, islets and rocks, most famous of them being Palagruza, a mythical group of 10 islets located approximately 42 nautical miles from the shores of the island of Vis, which have for centuries been the most abundant fishing grounds on the Adriatic. The archipelago of Palagruza is located in the middle od the Adriatic sea, and closer to Italian mainland than to Croatian. If you think about the distance from Komiza to Palagruza and take into the account that both are located on the open sea, you should really be astounded by the skills and knowledge of medieval fishermen from Komiza that regularly fished in this area.

The volcanic islet of Jabuka, which is located around 36 nautical miles in the direction west-northwest from the town of Komiza is another gem in the crown of the Vis archipelago. It welcomes many scientists and sailors who come to explore this  strange steep and hardly accessible island and its endemic species, mainly black lizard of Jabuka. Not far away from Jabuka, the island of Svetac (St. Andreas) is located. It was an inhabited island until recently, but with the death of it’s last inhabitant. Mrs. Jurka Zanki, the island is today official registered as uninhabited, but this does not prevent many visitors of exploring it.  The island of Bisevo is a small island located just 5 nautical miles off the town of Komiza. It has around 20 permanent inhabitants, and it boasts with one of the most known natural phenomena on the Adriatic, the Blue Cave which impresses with eternal dance of the sun, blue sea and white stone.